The Joya Centre was founded by Paulina Aarts, a Dutch psychotherapist, educator and documentary maker.

Her media background added an important extra dimension when targeting both professionals and the general public during a nationwide child abuse awareness programme, which she coordinated and presented for several years. Working thus within as well as outside of the framework of institutionalized health care, she developed an interest in subtle, non-medical ways of healing the past. The work of Alfred Tomatis is applicable to this category.

Initially, Paulina undertook an introductory training in the Tomatis method in the Paris centre, as part of a journalistic research project. She then chose to have some first-hand experience, and noticed the profound effect the method had on herself as well as on her children. 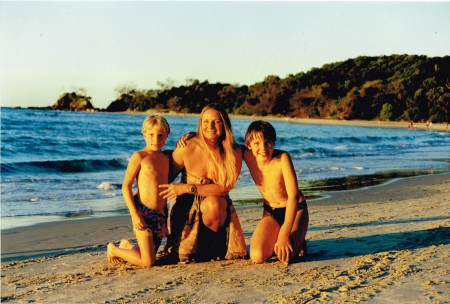 Above is a picture taken after their arrival, at the end of a three years’ journey: ‘Three Musketeers’ landing on NZ shores.

Her documentary ‘the myths we live’ and various series on health and education, brought acclaim. Yet, also a form of restlessness and the growing need to ‘walk the talk’ related to her interest in political and social activism and change. Not long after, time was ripe for a major change in direction and lifestyle. Before moving to New Zealand, she finalised her training in the Tomatis centres in London and Sydney. The Joya Centre was set up in Nelson in 2002, allowing Paulina to continue her work as a therapist in one of the most attractive and inspirational places in New Zealand.