“I paint as the bird sings.” – Claude Monet

There is a relationship between the world of sound and the world of colour. Just as the prism breaks down light and shows it as a rainbow, the cochlea in the inner ear does the same by opening up a frequential ‘fan’ of sound.  Our perception of sound is clearest in a range from 16 to 16.000 Hertz. A portion of this curve is matched in the visual field.

In his Paris centre, Tomatis subjected people to filtered Mozart at different levels, and asked the testees to draw while listening. He found that the choice of colour and the quality in colour tone was influenced by the music  heard through the Electronic Ear. This became a useful tool in testing very young or autistic children, who could sometimes be more easily analysed through interpretation of their drawings than through attempts at direct communication.

The phenomenon also attracted a number of visual artists and painters, who wanted to explore the Tomatis Effect and see whether they could perceive colour differently while combining listening with painting. They found that they did.

To give an example: the zone between 1000 to 2000 Hz – which determines quality of timbre for the voice –  corresponds with yellow. It’s the colour most of us see best. We can easily distinguish between 40 shades of  yellow, whereas we have much more difficulty with green. The acoustic equivalent of green lies around 3000 Hz,  and is much more obscure, except to the well-exercised ears of a musician.

In the corresponding visual scene something similar happens. There are but a few people who perceive more than a few shades of green. After a  series of sessions, the French painter Jean Aujame, one of Tomatis’ clients, could easily list fifty different greens. In fact,  his forest paintings of the Massif Central are, according to Tomatis, “a symphony of green”. 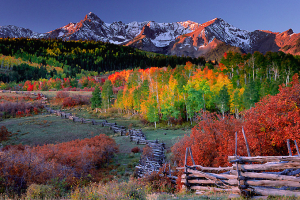 As a rule, one can say that the lower frequencies evoke the darker tones, the siennas and the reds, followed by  the medium ranges of orange and yellow. The high frequencies find their equivalent in the greens, then blue  and indigo.

For any painter, professional or non-professional, who is interested in widening his or her spectral horizon, Listening Training could be key.